As today is the shortest day of the year in the Northern Hemisphere (and the longest in the Southern Hemisphere), it seems appropriate to talk about how the seasons change our bodies’ rhythms. Many things change with the seasons, but the main seasonal variation that I will consider here is the variation in day length.

The seasonal variation in light duration is a big change experienced as you move away from the equator. 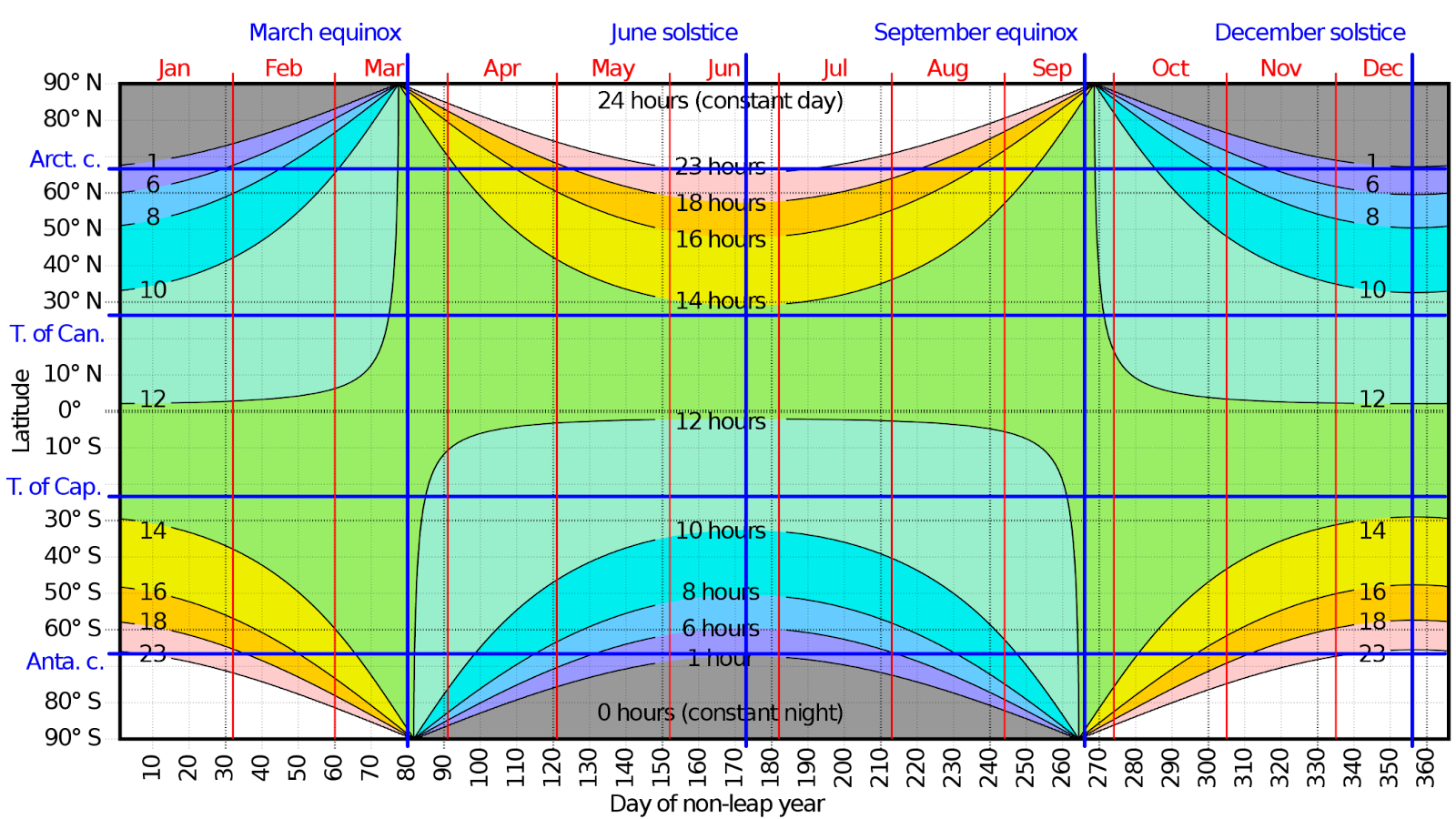 A contour plot of the number of hours of daylight as a function of latitude and day of the year. (Courtesy Wikipedia)

Growing up in Texas, I didn’t really appreciate this variation, but during my graduate school years in Michigan, I experienced it first hand. Personally, the short winter days were a bigger adjustment than the temperature. It felt like anytime I had to drive it was dark and snowing.

One of the more surprising seasonal cycles is that human reproduction varies seasonally. So called “birth pulses” have been found to occur seasonally within the United States (Huber et al. 2004). Suicide numbers peak in the late spring/early summer. This is also the time of year associated with peaks in aggression and violent acts such as homicide and mass shootings (Geoffroy and Amad 2016).

Figure taken from Stevenson et al “Disrupted seasonal biology impacts health, food security and ecosystems”, Proceedings of the Royal Society B, Oct 2015. (a) Show the suicide rates in Japan (b) Minor assaults in England and Wales.

Historically, battles and other aggressive behaviors have been shown to peak in this season as well. With all of these seasonal variations, it is natural to ask how the body keeps track of the seasons. Also, what does this have to do with circadian rhythms and the mission at Arcascope?

First, a bit of background. Our daily rhythms are driven by biological clocks found throughout the body. The most important of these clocks is the central circadian clock located in a region of the hypothalamus called the suprachiasmatic nucleus (SCN). The central clock coordinates and synchronizes the other clocks found throughout the body, and—importantly —the central clock receives light information directly from the eyes. These light signals are the primary mechanism by which our bodies’ internal clocks stay aligned to the outside world.

It turns out that this central clock is also responsible for maintaining the body’s record of seasonal information (Hannay, Forger, and Booth 2020; Coomans, Ramkisoensing, and Meijer 2015). It is both a daily clock and an annual calendar. This means the core clock has to somehow maintain a longer-term memory of the light it has seen over the past weeks and months. After all, you wouldn’t want to switch into winter mode just because of an especially cloudy afternoon in July.

The daily 24-hour clock can be found ticking inside each of the individual neurons in the SCN. By averaging across these neurons at the population level (there are around ten thousand of them), you can arrive at a consensus daily time. The seasonal clock seems to work differently: important parts of the seasonal calendar are stored at the population level. This means each individual cell doesn’t know if it is July or January, but if you look at the whole population you can see seasonal changes. In other words, while the daily clock is stored by the consensus or average of the individual clocks, the seasonal information is encoded in the spatial patterns of the clock neurons.

Interestingly, the seasonal patterns can also feed back on the daily clock and change how it operates (Pittendrigh and Daan 1976). For example, keeping lab animals in summer or winter conditions is known to cause lasting changes to their circadian clocks (the intrinsic period of the clock). These changes can persist for months after they have been moved into a different lighting environment. Another example is that mammals kept in lighting conditions close to long summer days are less light-sensitive than those kept in winter conditions (Pittendrigh and Daan 1976; vanderLeest et al. 2009). One explanation is that the clock needs to be more sensitive to light in the winter for the obvious reason that less light is available (Hannay, Forger, and Booth 2020).

In modern life, our light exposure patterns do not differ as widely across the seasons due to artificial lighting. In fact, the average light exposure is closer to a perpetual summer (Wehr 2001). This perpetual summer environment has been found to maintain a summer-like state in the melatonin cycle (Wehr 2001). This movement towards perpetual summer has likely suppressed seasonal cycles which are important to maintaining health (Wehr 2001; Stevenson et al. 2015). Mice kept in constant artificial light have been found to have bone deterioration, reduced skeletal muscle function, and disrupted immune function. In humans, it has been shown that natural lighting conditions (camping) leads to a lengthening of the biological night during the winter months (Stothard et al. 2017).

It is clear that the seasonal variation is important to our health and that modern artificial lighting is disrupting those cycles. On top of that, the long-term memory of light exposures means that these seasonal changes can also affect the operation of the daily clock. At Arcascope our core mathematical models are built to incorporate these seasonal variations— all as part of our goal of helping people maintain healthy daily and seasonal rhythms.